My boyfriend moved states to take a great job offer so we decided to try the long distance thing. Since he worked longer hours than I did, I more often went to him than vice versa. I was eventually able to convince my boss to let me work from home on Fridays so that I could hop on a plane early morning and work from my boyfriend’s apartment until he got home. After a few months of this arrangement, my boyfriend broke up with me. One of the main reasons for doing so was that he didn’t think that I took my career seriously enough because I was out of the office on Fridays so that I could see him. Such a dick move considering he was the one who moved away in the first place and also the one that stressed seeing one another as often as possible.

I met a guy at a friend’s wedding and we started dating despite being on opposite coasts at the time. We stayed together for a year and half. Over that period of time, I flew to him once a month and he flew to me once … literally once over that entire time period.

I have been with the same guy for 25 years now (yeah, I know, loooong time!), and our relationship hit a snag so we decided to go to Hawaii in hopes that the trip would spice things up a bit. I told him that I thought the trip would be good for our relationship because we could be together and have time for a little romance. He said, “Romance? That’s too much work.” My interpretation: You’re not worth the trouble to try.

My ex was one of those girls who liked to have me around all the time and loved to go places with me. Not a big deal. However, my friend was killed in Iraq and I had to travel to my hometown to attend the wake and funeral. My girlfriend got upset and cried because I wasn’t willing to wait for her classes to be over later that week so we could go together—which would have caused me to miss the wake and candle light ceremony.

I went on vacation to England for the entire summer. Within two weeks I got a Facebook friend request from a good looking guy who lived in the same town I was staying in. He said that if I ever wanted to see Wales by motorbike, I should let him know. Knowing that I needed to take every opportunity possible, I got a hold of him and we went to Wales two days later. We really hit if off, spent at least every other day together. We went to Wales two more times, Liverpool, Manchester, all by motorbike. Which was very thrilling and made things spark incredibly.

After three weeks of this incredible summer “romance,” we had sex. A day later, things completely changed and we didn’t hang out the rest of the summer. He ignored my calls, ignored my texts. When I confronted him about being an ignorant dick, he played the “I don’t know what you’re talking about” card. It was really upsetting. Mostly because I left my favorite dress at his house. Of course, he refused to return it. So he worked really hard to impress, then as soon as he got what he wanted, he buggered off. From now on, I’m vacationing in France. 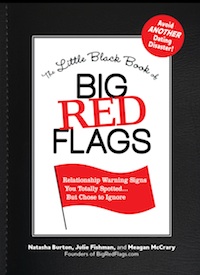 PRAISE FOR THE BOOK!

"The Little Black Book of Big Red Flags may very well become the dating girls' handbook. Run out and get a copy of the book before you say yes, or no, to your next date ladies!" —Examiner.com

"Though these three twenty-somethings have been blinded by love in the past, their hindsight is perfectly keen...The Little Black Book enumerates dating portents with moxie." —Marie Claire

"Dating gurus Natasha Burton, Julie Fishman and Meagan McCrary tell it like it is for dating newbies and experienced romantics alike. These writers break the tired self-help, pity-party mold." —The Philadelphia Tribune

"The Little Black Book of Big Red Flags can help you understand women, which will help you get dates and help you get laid--and if you're really special, get laid on your dates." —MTV's Clutch Blog